JARINYANU DAVID DOWNS
Kurtal: Those that were placed, found, named and remain

Anatjari Tjakamarra (c.1938-1992) was exceptional among the Pintupi artists. He was a leading figure in the Men’s Painting Room at Papunya in the early 1970s. By 1989, his work, Tingari Cycle Dreaming at Paratjakutti, 1988 had been acquired by the Metropolitan Museum of Art, New York under the category of ‘contemporary fine art’ and he also had a solo show at the prestigious John Weber Gallery, NY. Both of these achievements were firsts for a Western Desert artist.

This exhibition celebrates a small collection of important works produced between 1984-1987 when the artist was living at Tjukurla a small remote outstation near Docker River in Western Australia. This was a period when geographic isolation meant that his output as an artist was greatly reduced but also a time of great inspiration, living closer to and being able to revisit his country, most significantly Kurlkurta and Yawalyurru, the sites envisaged in this collection.

Kurlkurta, 1987 (cat.no. 4) is one of the artist’s most refined and accomplished major works from this period. As John Kean states ‘The distillation of a simple suite of forms, that was Anatjari’s lifelong endeavor, is perfected with the two halves of this composition, balanced, yet in dynamic relationship. Kurlkurta, 1987 is a shining manifestation of classical Aboriginal aesthetics, made possible through the artist’s dedication to ritual experience, a realm that lies behind the painting’s creation, and yet remains unseen by all but a handful of Aboriginal men of high degree.’

The late Duncan Kentish while posted as an Aboriginal Affairs Officer at Docker River commissioned this collection of works. The works have remained his private collection since their production. 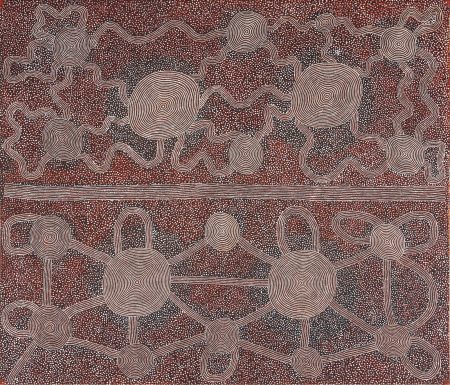 This will be Jarinyanu’s 3rd solo show with Greer Adams Fine Art since his passing and follows the artist’s sell out show in Sydney in 2019 and the major acquisition of 23 works by the Museum and Art Gallery of the Northern Territory last year.

Jarinyanu’s consistently visualised ancestral beings in human form, and this innovative, figurative style set him apart from any other Aboriginal artist of his time.  One of these epic figures from the Ngarrangkarni (Dreaming), Kurtal the Rainmaker, was a favoured subject of Jarinyanu and provides the focus of this exhibition of works painted as early as 1987 until 1994.

These works are from the private collection of the late Duncan Kentish. He and Jarinyanu had an important and productive friendship that lasted from the mid 1980s until the artist’s death in 1995. The offering is a rare viewing and collecting opportunity. The Executor of the Estate of Duncan Kentish, Karen Dayman and I consider it a privilege to be able to present this work to the public, the majority of which, for the very first time. 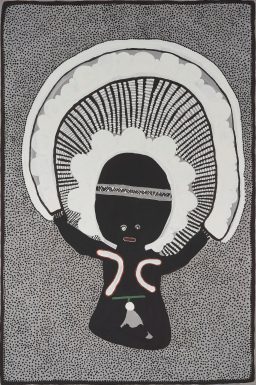