Objects both man-made and in nature travel through a life cycle: that cycle consists of use, dis-use and, ultimately, refuse. In nature many organisms and animals ‘inherit’ and re-cycle each other. An empty shell becomes the temporary home of a crab, a fallen butterfly wing melts into crumbling earth mixed with dry leaves and rain. Insects not visible to the human eye feast upon the husks of bones and skin in landscapes we probably don’t care about because they dwell on the periphery. The life cycles within nature stretch into a pattern of regeneration that is as a wide as a net and, at times, just as invisible. Ecology is not rapid, instead it forms a very long chain of extremely subtle and critical links. There is no death inside a continuum where everything is needed. 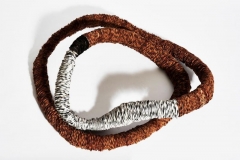 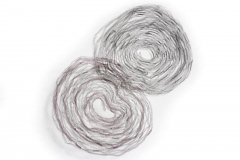 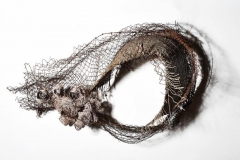 By contrast the life cycle of man-made materials has a different, more savage velocity. Within human industry a material can be vital one day and tarnished and hollow the second. Scrapped. Metals, paper, wood and especially plastics have become the burden of convenience. The world is over-packaged. Nothing it seems comes to the marketplace without a protective layer of polythene, paper, bubble-wrap, board and the bondage of tiny wires to hold it all in place. And all of that is refuse.

In this context the materials that an artist chooses are sharply relevant to the story they are telling. In the studio of Alison Coates, many works are in delicate stages of development. Some are sprouting, others are unravelling and others seem to hover between fruition and decay. At a few paces everything looks quite organic, like a web, a hive or a bent branch. But closer up the artists’ process is more complicated. The patterns of spirals and spines, the arc of bones and hinged wings are all guided by the artist’s line, not the random systems of other species. Wire, tightly bound with string, painted the colour of dried blood and lichen, fuses the man-made to our ‘perception’ of the natural. In Coates’ hands materials we think we know begin to mutate, converse and regenerate on their own.

The artist speaks of ‘painting’ with her materials and this happens as daylight both engulfs and immerses her forms. Some works dissolve into that light with their fragility and others swoop and weave and scar the shadowed wall, gauging into white space like a forceful cutting. Few sculptors are able to ‘draw’ as Coates does, but her process is meticulous and slow rather than swift and spontaneous.

This is patient work. To meet completion some pieces take years. Quills are threaded to filaments, insect wings are assembled like lace, some spools of wire made solid by twine tangle in on their own knotted logic and their geometry begins to dance. This is work where the square becomes a circle and then an ellipse and the eye follows the entire passage. In one large wall piece a collation of squares arc into a curve and are then bound with thin lines of raw string. Some works expose their structure in a naked way and others are layered, deceiving us into thinking they were just found like that… washed up at the foot of a factory or a sea cliff. It’s important to realise that these works are not collaged directly from nature. They are not the illustrative notes of a botanist or the bleak poem of a bone collector. Instead they are entities unto themselves, original to their own gestation and subject to their own patina of age.

Coates concedes to moments of indecision, torn between ‘finishing’ a structure with circles that intersect or letting it all hang, literally suspended, in a form that is both coalescing and unravelling at the same time. The process is kindred to drawing; using the tension of bare space to either compress or explode a form.

And when she describes her pieces it is never in a literal or objective sense. The experimental materiality of the work and the language that each material suggests is quite layered. These are artworks that are not about nature but seem more woven within it, inhabiting the core logic of organisms. The net and the line are themes that Coates refers to not as a subject but as an aesthetic sensibility. It is a very tactile way of seeing. Hers is the eye that settles on ephemera with a relentless curiosity: ‘broken lines, frayed nets, thin tracings in the sand, knotted lines, the scaffolding of a boat, the finding of things that are caught…’

In this exhibition the work of Alison Coates is cleaving away from the fastidious and the fragile and taking a more powerfully linear focus. The scale and heft of her new works impose in a way they never did before. They are growing in size and drama. Where earlier pieces were frenetic and weightless, these are drawn with a bolder stroke. This said, the materials are still intensely disparate: awash in a distraction of beauty, lighting upon all of the strange contrasts of the remnant world. Despite the fact that much of her palette is bleached, I see the work gathered on a sea-bed within the dark zone – that buried place where nothing is obvious, but everything, both living and dead, feeds the whole.